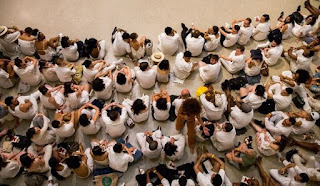 Solange Knowles presented “An Ode To,” an interdisciplinary performance inspired by her 2016 album A Seat at the Table at the Guggenheim Museum. Attendees, who arrived in all-white looks at the artist’s request, were treated to a multisensory piece that encompassed modern dance choreography, art installations, and a live set featuring songs from A Seat at the Table backed by a full horn ensemble.


As they descended down the museum’s spiraling walkway, Solange and her backup vocalists—dressed in coordinating earth-tone costumes—provided a splash of color amid the female dancers clad in long-sleeved white tops and leggings. The effect was striking, to say the least. And with a no-cellphone policy in effect, guests were fully immersed in the experience from start to finish.

Knowles herself creative directed choreographed and soundtracked the piece, which was presented as part of the Red Bull Music Academy Festival. But when it came to outfitting her troupe of dancers, backup singers, and full band, she turned to Telfar Clemens, the downtown New York designer known for his color-saturated unisex runway collections. According to Clemens, Knowles had a clear vision of how his signature aesthetic would fit into her artistic direction for the performance. “She had really good knowledge of the clothes and knew exactly what she wanted her stage performance to look like,” he says. “It was really color-driven.” 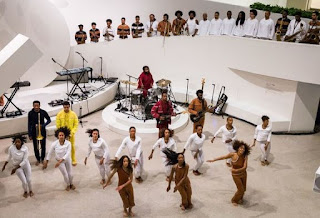 Uniquely dressed were the band and dancers in archival Telfar from previous collections, Knowles’s sepia-tone cut-out bodysuit and layered pants ensemble was custom-created for the demands of the performance. “For her specifically, it was designed with movement in mind,” says Clemens. “The show and the choreography were real, really energetic, so we wanted to make something she could actually move in.” And Knowles was able to dance, shout, jump, and even twerk comfortably, thanks to a few clever design details. “We built the mic pack into the back of her outfit, so basically she could slam herself on the ground, roll over, do whatever she wanted to do, and still sound amazing.” 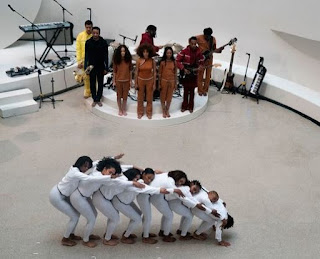 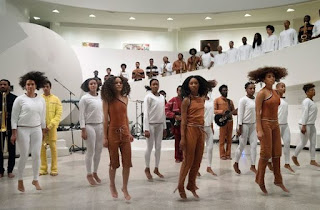 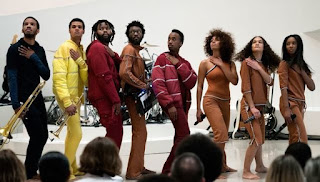