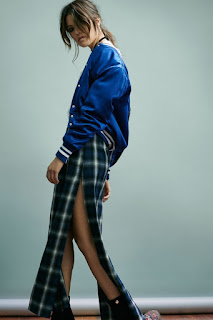 “Today’s luxury consumer wants something that is really unique and tells a story,” says Amiri founder Mike Amiri of the philosophy behind his L.A.-based label. “You can either find those qualities in vintage, or you can create something that has all the energy and characteristics of a vintage piece but the feel, fit, and fabrication of a luxury garment.”


That means that the ultra-distressed skinny jeans Axl Rose wore onstage with AC/DC last year were not the same ones he wore on the cover of Rolling Stonemore than two decades ago, but rather a pair of Amiri’s trademark MX1 jeans, which start at $1,000 and take up to five months to produce, destroy, and rebuild with French plonge leather patches in order to achieve that devil-may-care, rock ’n’ roll look. Similarly, those moth-eaten–looking hoodies and tees that Gigi Hadid and Zayn Malik like to twin in are, in fact, an Italian cashmere blend intentionally, and strategically, peppered with shotgun pellets somewhere out in Joshua Tree (and retail for $790 and $330, respectively). “We blend the irreverence of a DIY garage fashion piece with an haute couture approach,” Amiri says.
Born and raised in Los Angeles, Amiri spent several years working with such brands as Helmut Lang, J Brand, and RRL before trying his hand at designing his own pieces, influenced by classic L.A. grunge–meets–glam style. “Growing up here in the ’80s and ’90s, all those L.A. bands like Mötley Crüe, Van Halen, and Guns N’ Roses were playing at the Whiskey [a Go Go] and the Viper Room on Sunset,” Amiri says. “I was fascinated by them and the groupies lined up outside the clubs . . . the leopard print, the flannel, the hair.” But if the Amiri silhouette—skinny pants slung low, distressed T-shirts, frayed and unraveled sweaters, flannel shirts tied around the waist, and leather biker jackets—owes a lot to rock ’n’ roll’s irreverent style, the construction of each piece owes more to the discipline of French fashion ateliers. “There’s an art to distressing each piece,” Amiri explains. “Every destruction point, every stitch, paint splatter, and chipped brass button is thought through. Every hole is individually cut out by hand and each patch stitched using hand-embroidery machines. It enhances the vintage feel and makes it look like your girlfriend sewed it for you. Everything is imperfect yet perfectly different.”

Amiri started out, rather fittingly, in a studio in the basement of a dive-y, rock-themed Thai restaurant in Hollywood in 2013 and began selling one-offs to stylists for clients like Usher and Steven Tyler. Cult L.A. boutique Maxfield bought three pieces, one of which—a pair of leather pants—was promptly snapped up by Mick Jagger. Now the label has become one of the store’s best-selling menswear lines and attracts a star-studded lineup, from Keith Richards and Future (they both bought the merlot silk and velvet bomber jacket) to Justin Bieber (his stylist, Karla Welch, is a fan) and Odell Beckham, Jr. (who often wears the brand head to toe).
Now stocked in more than 140 stores worldwide—including The Webster in Miami, Montaigne Market in Paris, and Antonia in Milan—Amiri launched a women’s capsule collection earlier this year, adding a few ’90s-style slip dresses and long cardigans to the mix. Later this week, Maxfield will host a pop-up shop previewing the Fall 2017 men’s and women’s collections, along with a new line of sneakers and bags. “For too long, L.A. style has been appropriated by European fashion houses,” says Amiri. “It’s about time we bring it home.”
Amiri pop-up shop, May 13 at Maxfield Gallery, 8818 Melrose Avenue, West Hollywood.
at May 13, 2017