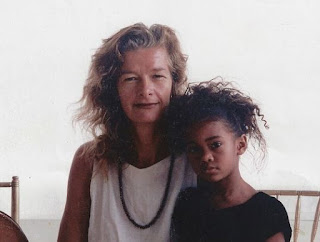 There comes a point in every young woman’s life when she will almost certainly question her mother’s fashion choices. For singer Amber Mark that moment came at a very young age. A dancer turned painter, her mother would wear bold colors and wild bohemian dresses that, as Mark tells it, “made her look like a hippie that was ready to start meditating at any moment.
” Now as her own artistic pursuits begin to take shape—Mark has a new EP titled 3:33am under her belt—the 23-year-old is finding that her personal style is following the path of her beloved mom. “I have definitely learned from the way she dressed over the years, especially when it comes to embracing color,” says Mark.

Much of the clothing that once belonged to Mark’s mother now serves as a remembrance—she passed away almost four years ago. Today, Mark wears her mother’s orange jackets, yellow scarves, and gold jewelry with pride, finding solace in the way they smell or how certain pieces can bring to mind a single memory of shopping trips to artisanal markets in Goa, India. She wears some of it while performing her soulful, earthy pop songs and ballads including “Monsoon,” the melancholy ode to the woman who gave her life. 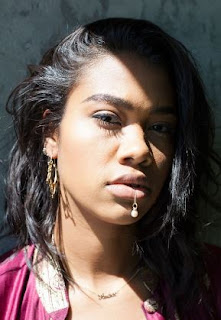 Mark’s evolving, reflective fashion sense also mirrors her nomadic upbringing. She was born on a farm in Tennessee to a Jamaican father and her mother, who was German. They lived in Miami, New York and eventually moved to India so that her mother could immerse herself in the study of thangka painting (a traditional Tibetan Buddhist form of art). After spending a few years living in a Darjeeling monastery, she and her mom eventually settled in Berlin. Though Mark takes inspiration for her music and personal style from a multitude of cultures, India definitely is the place she holds dear. The most cherished memories of her mother were formed there.
When Mark wears her mother’s clothes on stage she says “it feels like an emotional connect, like a nostalgic feeling. It helps in making me feel like she’s still around in a sense.” She adds, “I try to accent a lot of what I wear with her pieces, but it’s a mixture. With this new record especially, I really wanted to bring her out as much as I could, and that includes what I wear to perform—This is probably the closest I’ve ever been to her style.” Through her mother’s heirlooms she finds peace and comfort and in her own wardrobe, a sense of true self. “She was her own person,” Mark says. “Her colors were so vibrant and she always told me to do my own thing no matter what. We both did whatever we wanted.”
Above, the singer takes us through the wardrobe that honors her mother.
at May 13, 2017