Yara Shahidi on Teen Activism, Academics, and the Game-Changing Power of Personal Style 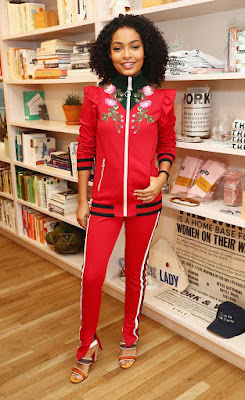 Yara Shahidi is living the teenage dream. “It’s been crazy and fantastic, and I’ve loved every minute,” she says with a grin in the powder room of The Wing, Manhattan’s all-women social club. At 17, Shahidi is already preternaturally poised in a Gucci ruffled jumpsuit and coordinated heels, but her appeal is more about substance than style. As a member of the political, passionate, and socially conscious Gen Z, Shahidi serves as a role model to her thousands of followers. Sitting front row at Chanel’s Paris Resort show one moment and advocating for girls in STEM careers the next, she seems to have found the balance between Hollywood’s fantasy and the real-world responsibilities that come with having an engaged millennial fan base.

Shahidi was on hand last week to introduce members of the Lower Eastside Girls Club and front a talk about feminism, sponsored by Fossil. Taking on the serious topics (Trumpism, women’s rights, and racism) along with lighthearted fare (her self-confessed addiction to social media, her love of podcasts, and, of course, fashion) she displayed the relatable charm that’s won the hearts and minds of teens everywhere. Here the Black-ish star talks college applications, dressing for the red carpet, and why doesn’t mind being a role model.
On graduating high school
“Personally, getting into college was a big deal because I realized it’s probably one of the only things I’ve fully planned. The rest of my life has been, for the most part, a nice little happy accident. I’m glad that it happened this way, but it’s nonetheless unintentional. School has been the one thing that I’ve consistently had my eyes on for the past 12 years. There’s that initial fear when you close your eyes and have to click the ‘look at decision’ button [on each college application] to see what they’ve said about you. It can feel like such a judgment on your entire life."
On her personal style evolution
“I cannot deny that access has been a major part of my style evolution. I know [it’s] something everyone goes through, once you have access to certain things you didn’t before, you will dress differently. On a personal level, I think dressing is such a form of expression and when you do events, it’s important to feel as though you are authentically yourself. Maintaining a sense of your personality grounds you in your space, I try and just make what I wear a reflection of how I feel at that moment, at that particular place in time. I have a great stylist, Jason Bolden, and that definitely helps.”
On dressing for the red carpet
“For something like the MTV Movie Awards, I try not to take myself too seriously, and I’m fine going out there [with fashion]. Halfway through the night, I ended up switching outfits, into another little Gucci dress, because my one rule is that I have to be able to move. My movement was a little restricted [in the first look] but after the switch, I could have cartwheeled.”
On playing a character with fearless style
“Zoey Johnson [the character Shahidi plays on Black-ish] has taught me how to be adventurous. Even from the first season to the third season there’s such a drastic change in what she wears, and it’s funny, because her closet is what I wish my closet looked like. There are moments where I’m like, ‘Oh my goodness, this is why the family cannot afford to send Jack to college—everything has all gone to Zoey’s closet!’"
There is one scene in which she walks through and you see her for two seconds, but she’s in a vintage Dolce & Gabbana [dress]. This is like a sweats and T-shirt moment, but Zoey’s not afraid to take risks. Sometimes they work out perfectly. Other times, it’s like, ‘Wow, she went there.’ Ultimately, I think it just adds to the confidence of the character; she’s so unabashedly Zoey. Even if you were to just pull the clothes from each character, you could instantly tell which were hers because they’re so connected to who she is and what she represents.” 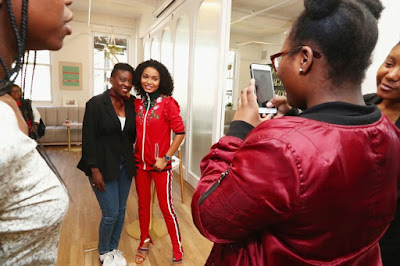 On coming into her own in the public eye
“It’s a fortunate space to be in, to feel as though my presence can make a difference. I’ve gotten to live the past couple of years publicly and so authentically myself. It’s exciting to see that I can be who I am and people will still gravitate towards that. I go into this world of public living, not hoping for fame or celebrity but to make some sort of impact. There is a cause and effect of putting my effort in, to do something other than what is expected or demanded of my position, and the fact that I’ve gotten so much support for it and so much love while creating some amazing memories and moments has been so gratifying.”
On what’s coming next
“I’m in the process of creation right now, and it’s a nice little period of transition. I’m trying to get a couple of digital pieces to series and become a content creator. It’s kind of crazy because, as much fun as this past year has been, it’s like, ‘Oh my goodness, only more is going to happen in 2018!’ ”
at May 17, 2017