Between Raf Simons and Calvin Klein 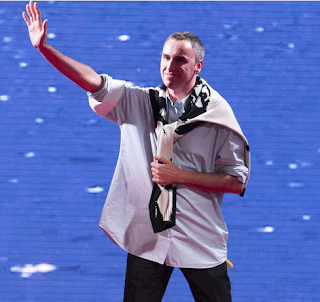 Despite rave reviews for his runway shows, a huge marketing budget and the support of major magazines and movie stars, the designer failed to ignite a major new generation of customers for the brand. Anything but: the most recent quarterly results for PVH, the company that controls Calvin Klein revealed that the house has been forced to heavily discount tens of thousands of apparel items in a drive to keep up numbers.
Moreover, according to sources close to Calvin Klein on both sides of the Atlantic, senior management grew extremely disillusioned by Simons, who they regard as high-handed and secretive; and not remotely respectful of the house’s minimalist yet sexy DNA.
On top of that, the founder Calvin Klein, is believed to be highly critical of many of Simons' aesthetic choices. Calvin is said to be particularly pained by Simons' dramatic overhaul of his famous flagship at 654 Madison Avenue. Designed by master minimalist architect John Pawson, the all-white boutique was built as a pure, linear temple of design. Raf, however, completely destroyed that concept, installing a series of gaudy yellow walls, woolly red hangings and primary color shelving by his fetish artist, Sterling Ruby.
“Calvin has not uttered a word in public, but every time he passes the boutique he winces,” sniffed one person familiar with the designer.
Calvin Klein’s board is also understood to have been dismayed by the power handed over to Raf’s former boyfriend Jean-Georges d’Orazio. The pair got together when d’Orazio worked in a Christian Dior Paris boutique, and Raf was the couturier at the famed marque. When Simons moved to New York in summer 2016, D’Orazio followed, and was appointed director of client relations at the Madison Avenue boutique.
In Paris, Bernard Arnault was believed to have blamed d’Orazio for having encouraged Simons away from Dior to a new life in America. While LVMH was less than impressed with the pair’s PDA's, notably at Dior post-cruise show parties in Cannes.
Shortly after arriving in Manhattan, d’Orazio was on the Calvin Klein payroll and apparently deciding on expensive works of modern art to place in Calvin Klein’s stores. D’Orazio and Simons have apparently since cordially separated as a couple.
at December 22, 2018