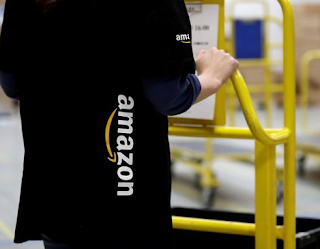 Whole Foods employees have visited regions of Western North America for potential retail spaces in parts of Idaho, southern Utah and Wyoming where it currently has no stores, the Journal reported citing a source.

The world's largest online retailer plans to expand its two-hour delivery service, Prime Now, to nearly all of its roughly 475 Whole Foods stores in the United States, the Journal said, citing another source.


The plans are a part in the series of Amazon's grocery, delivery and pickup expansions to cities across the United States in recent months.


Prime Now services include a two-hour delivery option to subscribers in more than 60 cities, and online grocery pickup from Whole Foods stores in as little as 30 minutes from nearly 30 cities, WSJ said.


Amazon was not immediately available for comment outside regular business hours.
at January 02, 2019

Email ThisBlogThis!Share to TwitterShare to FacebookShare to Pinterest
Labels: amazon