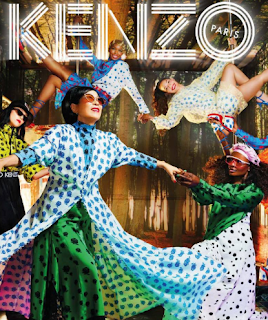 first Britney, now Humberto Leon’s mother. Kenzo’s campaign stars are nothing short of surprising. Blink and you might miss Leon senior in the spring/summer 2019 images, however.


Photographed by David LaChapelle, the campaign visualizes “Kenzotopia” – a rather fabulous looking place which celebrates a riot of color and playfulness. Look at the curious sets and Cirque du Soleil poses – yep, mum too – and anything goes, it would seem.

“My mum showed up on set with a bowl of Chinese soup for me to drink because that’s what mums do,” Leon tells Vogue of the shoot. “David saw her and wanted her in the picture. He was adamant she needed to be in this specific shot. She was game, and the rest is history.”LaChapelle took on the commission precisely because of this openness and spontaneity. “I felt that with the freedom of the team, the cool clothes and the keywords Humberto gave me – ‘utopia paradise’ – the shoot was right on point,” the photographer explains. “I was really flattered Humberto and Carol [Lim] asked me [to shoot it] because some of the people they have worked with are ones I look up to a lot. Jean-Paul Goude and Spike Jonze, for example, are two of my favorite artists – for life.”