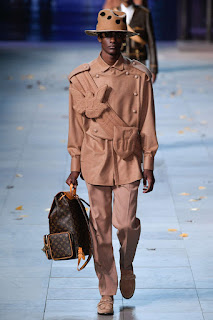 Virgil Abloh, the red-hot menswear designer of Louis Vuitton, has on several occasions insisted in print and digital interviews that he is not a designer. An opinion which has won him plaudits for self-effacement; but also a view, on the basis of the evidence in his second show for the historic house, may well be partially true.


That said, Abloh is certainly a great showman. Vuitton built him a great set, a recreation of the great melting pot of the planet, the Lower East Side, replete with street signs for Ludlow and Rivington Streets; mattresses for Bowery bums; autumn leaves; trash bins; dynamic graffiti by Jim Joe, Lewy BTM and Futura; and a marvelous jazz band, led by Devonté Hynes, who played a series of hits by Michael Jackson.
The King of Pop would have loved the homage, which even included the famous illuminated steps from the epic Billie Jean dance video. Just in case you didn’t get it – the invitation was a white glove with studded with Swarovski crystals.
“There’s only one Louis Vuitton,” wrote Virgil in his own hand on the invites. Adding in his notes: “His (Jackson’s) life would become the only recorded study of a man’s sense of dress from boyhood through adulthood to play out on a globally observed stage.”
Testifying to the importance of the show, the emperor of luxury Bernard Arnault, chairman of the giant French conglomerate LVMH and hence the ultimate boss of Vuitton, sat down front row with his two eldest sons, Antoine and Alexandre. Quite what Monsieur Arnault thought of the overpowering smell of ganja inside the massive tent in the Tuileries we can only guess.
After a beautifully plaintiff sax solo underneath a Manhattan streetlight, the action began, largely in darkness. The opening coats and suits looks were in felt wool; hefty silhouettes in battleship or parchment gray with matching overnight bags. Abloh showed a bulbous down jerkin in Brooks Brothers gray and an anthracite wool coat, both cleverly dimpled in the LV monogram pattern; a few massive padded coats worthy of the Japanese avant garde; and a shrunken puffer with horizontal panel and a hood.  Many anchored with brothel creeper style sneakers. He even used the flat gray in some great cavalry shirts and jackets and in a brilliant trick added some 3D images of toiling artisans.

However, just as much as it’s debatable whether Abloh is a designer, it’s also arguable that he is neither a tailor. The cut and line of these clothes showed little flourish.
As a young man in Imperial Roman purple satin did a brilliant imitation of Michael Jackson’s dance moves, one witnessed plenty of eye-catching clothes from the remarkable leather monogram breastplates to a fab series of patchwork flag looks with matching giant totes. However, this was a pure sportswear statement, which for a brand that prides itself on being the ultimate in elegant travel did seem rather a stretch.
Abloh entitled the collection, in another Jackson reference: “Sliding, Backwards, Slowly.” He took his bow to much applause, before the most racially mixed crowd ever seen at a major Paris show, bearing down barriers in an achievement for which he should be justly proud.

Yet, the invitation simply said Louis Vuitton, with no reference to it being just men’s fashion. Moreover, in the manner of French Revolutionaries, who re-numbered the national calendar, making their rebellion year one of a new era, Abloh called this show '2.' Even put the year on the charcoal foam cushions on the seats of all the guests.

Still, I always did wonder what it would be like to see Jackson dance in the Lower East Side, where I spent five very happy days in my twenties, and I now I have a better idea.
By Godfrey Deeny
at January 17, 2019