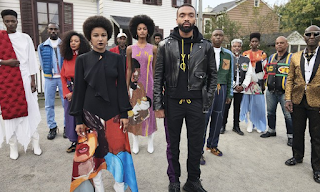 It was dark. A misty rain was falling, a gospel choir was arrayed in front of a row of cabins—relics of the nineteenth-century free black community of Weeksville in Brooklyn—and Kerby Jean-Raymond, the designer of Pyer Moss, was showing his spring 2019 collection. The clothes on the makeshift runway were a literal rendering of the ties that bind: Jean-Raymond, the winner of the 2018 CFDA/Vogue Fashion Fund award, had commissioned portraits from the artist Derrick Adams, which were literally woven into the clothes—a young black man enlivened a white tee; a father and child shimmered on a beaded sheath. The night was a tribute to community—not just the friends and family in the audience and on the runway, but also a kinship with ancestors. “I want to write a new narrative,” Jean-Raymond explained.


If the Pyer Moss show was powerful and moving, it also provided a stunning example of how the fashion world is waking up—not a minute too soon!—to both the necessity and the joy of embracing shared values. A fierce solidarity characterizes the new generation of young American designers and stands as a radical refutation of the industry’s stereotype as backbiting and hypercompetitive. Maybe the fraught political climate has made this fellow-feeling so strong, or maybe it’s as simple as the new way of doing business—direct-to-consumer models mean that designers need not fight one another for retail floor space. Or perhaps it has to do with the rise of the internet, which offers a way of reaching across borders. And why not celebrate this profound inclusivity on your runways and your Instagram and in your ad campaign?
This open-arms insistence on inclusion, on the broadest definition of community, was everywhere during the last cycle of New York shows. At Gypsy Sport, designer Rio Uribe (a CFDA/Vogue Fashion Fund winner in 2015) had his pal Domonique Echeverria, a spiritual healer, kick off his proceedings with a meditation and a chant. If the audience buzzed when a denim-clad Lourdes Leon, Madonna’s daughter, walked the show, Uribe shrugs—she’s just another member of his posse. And who says your family includes only members your own age? Eckhaus Latta invited a gaggle of preschoolers—kids of their best friends—to bang on pots as models wandered through a vast Brooklyn industrial space. At Brandon Maxwell—a designer who combines an unabashed enthusiasm for old-fashioned glamour-pusses with a thoroughly postmodern commitment to diversity—Maxwell’s 81-year-old grandmother, a study in scarlet, strode the runway with him. “I had 65 people, from Karlie Kloss to childhood friends, who flew in for the show,” he says.
The days when createurs held their ideas close to the vest have thankfully been replaced by a fresh collaborative spirit. These new fraternities—and sororities—are now frequently made up of other young designers. “We share information, factories, interns, models, lights, everything!” says 2017 CFDA/Vogue Fashion Fund winner Telfar Clemens, whose tribe functions almost like a collective. Reached early in the morning after a late session DJ’ing in Bushwick, Clemens mentions that his pack the night before included Shayne Oliver (late of Hood By Air), Jean-Raymond, the Eckhaus Latta gang, and Patric DiCaprio, Bryn Taubensee, and Claire Sully of Vaquera. And as Jean-Raymond explains, the other designers of color he is close to function as a much-needed support group. “We can help each other, share experiences,” he says. “We’ve had to create our own parallel universe for so long.”
Sometimes a more seasoned designer functions as a make-believe sibling. Gabriela Hearst, author of unabashedly exquisite grown-up clothes, confesses that she owes an enormous debt to the encouragement of her friend the veteran Coach designer Stuart Vevers. Hearst, who grew up in Uruguay, became a U.S. citizen in 2016 and has a deep love for her new American family. “We have a responsibility now to do much more—we have to be ambassadors of the true American spirit! This is a country founded by immigrants.”
Maxwell widens the lens. “It’s bigger than politics. The blatant hatred that we are feeling and seeing is both terrifying and heartbreaking, and you want to hold on to someone—and hold tight. The American Dream is to treat people kindly! So I am going to use my small, creaky platform to say: Everybody can come in and be in fashion.”
at January 18, 2019