Why the fashion industry will be ditching fur next year 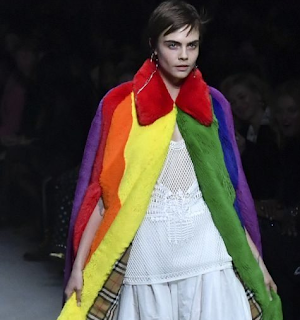 First up was Michael Kors, which announced at the very end of 2017 that it would phase out the use of fur in its collections (and those of its company Jimmy Choo) by the end of December 2018. Then, in March, Donatella Versace told The Economist's 1843 magazine that her family's luxury fashion label would no longer use real furs, with DKNY, Donna Karan and Furla following suit later that month.

In April the animal rights association PETA France revealed that the designer and artistic director of the fashion house Margiela, John Galliano, had decided to go fur-free, and in June the British online fashion retailer Asos announced that it was banning the sale of silk, cashmere and mohair products on its site. September saw the British luxury heavyweight Burberry officially state its plans to no longer use real fur and angora, with Diane von Furstenberg and the US heritage brand Coach publicly turning their backs on the practice in October. The iconic French creative Jean-Paul Gaultier is the latest designer to make the leap, revealing in a TV interview this November that he intends to drop animal fur from his collections, calling the way in which animals are killed for their fur "absolutely deplorable."


So what will replace fur, and the cozy, luxurious aesthetic it invoked? Luckily for conscientious fashionistas, faking it has never been so stylish. As multiple fashion heavyweights have proven over the past few seasons, faux fur is having a serious fashion moment; this fall, high street staple Topshop released a line of vegan-friendly, faux fur coats and accessories, while H&M's recent Moschino collaboration featured a hot pink faux fur jacket. Vegan brand Unreal Fur has been doing a roaring trade in high-end fake furs since 2011. And shoppers are responding; according to the 2018 eBay Shopping Report, 50,000 faux fur items were sold on the site between July and September – marking a 105% increase in just 90 days.


The change in attitudes could also be in part due to the number of celebrities adopting the trend, too – Bella Hadid, for example, has been spotted in faux fur pieces by the fur-free label Marei 1998, and Cara Delevingne's modelling of Burberry's faux fur rainbow cape back in Autumn has become one of the brand's most iconic catwalk moments. Victoria Beckham recently caused a stir after being spotted in her own 'Split Sleeve Fitted Coat' in faux leopard print fur, while Alexa Chung is a fan of the faux fur label Shrimps. The message couldn't be clearer: fur has fallen out of fashion – and it looks like it might be for good.
at January 02, 2019