With M1992 and Magliano, continuity of Italian fashion is assured 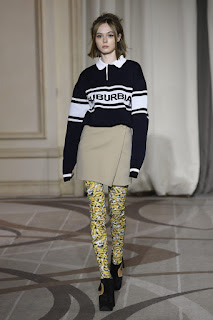 Dorian (real first name Stefano) Tarantini, a DJ who switched over to fashion in 2017 with his M1992 label, took a dive into 1990s Britpop with his Autumn/Winter 2019-20 collection. He offered a new take on the Mod movement’s '60s style that was later appropriated by Blur and other bands like Pulp or Oasis in the '90s. The silhouettes are perfectly defined, the cuts impeccable: from slightly flared cropped trousers to monochrome polyester jersey suits, whose oversized jackets are worn over white turtleneck sweaters or colourful, long-sleeved knitwear polos.

All of the collection’s details are picked just so: suede Adidas Gazelle sneakers with black and white striped Adidas socks, Baracuta’s iconic Hurrington jacket made in waterproof cotton by British fabric manufacturer Millerein, with tartan lining and oblique lateral pockets, in a new version with several different models. As well as pics of English protesters and football hooligans block-printed on shirts. Not to mention football-kit-style striped sweaters, oh-so-British tartan and micro-check patterns and collarless jackets and overcoats fashioned out of Union Jack fabric.

“I dipped into my teenage memories, of the time when I used to go to London. But it isn’t a case of nostalgia, these are just a few elements from the past that I wanted to reinterpret in a fresh way, making them available to today’s youth, which did not experience that era first-hand,” Dorian Tarantini told FashionNetwork.com backstage.

M1992’s womenswear wardrobe is greatly expanded this season, with an emphasis on '60s-style mini dresses with quirky pop prints, like the cigarette ends that morph into geometric patterns. Club style is never far from the surface, as in the white jacket-and-trousers set covered in Swarovski crystals.


Magliano’s style sits at the opposite end of the register: it draws its inspiration from a lesser-known, provincial Italy, from the popular culture of regions like Emilia-Romagna and its capital Bologna in particular, where the label’s designer Luca Magliano hails from, with a plethora of colourful characters steeped in a typically Italian mood.

There is a sly street seller with all sorts of concealed objects pinned to the lining of his fine grey woollen overcoat; a monk-like student wearing an ultra-long brown sweater-tunic; a black-spectacled mafia don, hands in the pockets of his grey striped suit, with double-breasted blazer and darted trousers; and a musician, sporting a white silk shirt over which a piano keyboard undulates.
The catalogue is completed by an exhibitionist strutting around in white gloves and socks, clad simply in lace shorts under a long plush coat, and a pickpocket, whose cache of stolen wallets overflows from the pockets of his overcoat and check trousers, worn with a hand-knitted, mustard-coloured sweater.


Wide neckties and white pocket squares are de rigueur for these dapper gentlemen, who unselfconsciously match black leather trousers with flowery pink or white satin shirts, or flaunt body-hugging knitwear and ample jackets with a fitted waist.  Magliano’s is a natural kind of elegance, the same to be found a little while later in Dolce & Gabbana’s superb suits with a chic-retro cut, their show celebrating Italian style in all its splendour.

“My whole world is expressed in this collection, inspired by the famous Via Emilia, the magical road which cuts across Emilia-Romagna, linking Bologna to Rimini and the coast, rich in folklore and sub-cultures, including the gay community, my own,” said Magliano, who is especially fond of reinterpreting the great menswear classics.

“Everything is produced by the wonderful Arcari & Co. factory in Faenza. But we do love to work on the models some more, taking care of finishings, extra cuts, stitching and assembly,” added the designer, for whom this was the maiden show at the Milan Fashion Week. A promising debut, witnessed by a large audience, which included the founder of distributor Slam Jam, Luca Benini.