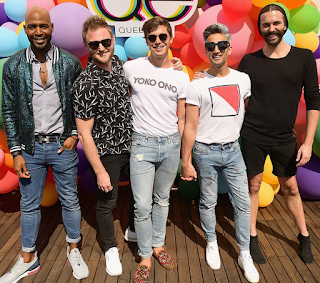 American rapper Cardi B proved to be one of the biggest influences on the app’s community, with listings of Fashion Nova apparel increasing 195% on the platform following her collaboration with the brand, and purchases rising 210%.

Hit Netflix series Queer Eye also had a hand in driving trends on the platform, with purchases of Tan France-approved short-sleeve button-down shirts increasing 206% in 2018, while the graphic tees favored by Antoni Porowski and Karamo Brown’s signature bomber jacket saw purchases rise 207% and 129%, respectively.
The Markle Effect was in full swing on Poshmark last year as well, with purchases of pieces worn by the Duchess of Sussex spiking in popularity. Purchases of Aquazzura heels, for example, rose 151% in 2018, with Mulberry and Givenchy clutches (83%) and pin-striped blouses (116%) also doing well out of their association with the stylish royal.
Elsewhere, perennial influencers the Kardashians helped boost the popularity of bike shorts and 80s-inspired spandex, which saw a 50% increase in listings and a 63% rise in purchases on Poshmark.
Products seeing the biggest increases in purchases on the app include men’s Off-White sneakers – up 1,916%, women’s teddy coats (688%,) women’s Gucci Marmont Belts (591%), fanny packs (354%) and acrylic earrings (298%).
As a leader in social commerce, Poshmark also has access to some revealing data concerning its users’ interactions around products. Dresses were by far the buzziest pieces in 2018, racking up 862 million shares, 66.5 million likes and 12.4 million comments on the platform.


In second place, makeup generated 140.3 million shares, 21.2 million likes and 4.1 million comments, while crossbody bags rounded out the top three with 90.9 million shares, 15 million likes, and 3.1 million comments.
As pointed out by Poshmark, these interactions are far from inconsequential, as 74% of millennials included in a recent survey say that social media influences their shopping, while 72% of shoppers make purchases based on products they have seen on Instagram.
The company further highlighted that $6.5 billion was generated via social shopping by the top 500 retailers in 2017.
It’s certainly a model which seems to be working for Poshmark, where a sale is made almost every second and 78% of transactions involve a social interaction.
“In essence, social commerce leverages the human interactions prominent on social networks to power more personal, immersive transactions and drive an unparalleled shopping experience,” explained Poshmark founder and CEO Manish Chandra in a press release. “It allows conversations to happen around purchases – things like fit, color and size – that just aren’t possible in other e-commerce models.”
The platform, which launched in 2011, currently boasts 40 million community members and 5 million sellers.
at February 02, 2019