Gucci invests over $10 million in diversity 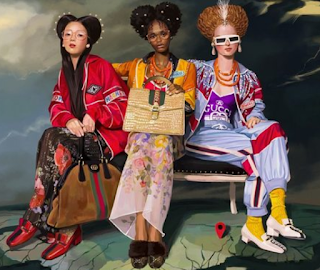 Kering's flagship brand was at the centre of a social media maelstrom last month, as it received accusations of racism for selling a black jumper, the collar of which could be turned up to cover the bottom half of the wearer's face, revealing a mouth slit which was bordered with a thick red line evoking the exaggerated lips of blackface performers.

Gucci immediately apologised and announced that it had pulled the sweater from stores. "We consider diversity to be a fundamental value to be fully upheld, respected, and at the forefront of every decision we make. We are fully committed to increasing diversity throughout our organization and turning this incident into a powerful learning moment for the Gucci team and beyond," said the house in an official statement published at the time.


This episode seems to have pushed the label to accelerate its activities focused on social development and diversity. Its newly announced strategy is structured around four initiatives: the recruitment of a global director for diversity and inclusion; an international programme of multicultural scholarships in the design sector, which will culminate with the hiring of five promising talents from diverse backgrounds at the brand's creative studio in Rome; a training programme designed to heighten the cultural awareness of the company's 18,000 employees; and an internal exchange programme, resulting in the transfer of three regional directors to Gucci's main HQ.


The company has also decided to expand and make public its "Gucci Changemakers" project, which began as an internal initiative last year and was presented to the employee's of the brand's Milanese headquarters in January. The project aims to "encourage diversity and inclusion" with lasting effect.


"I believe in dialogue, building bridges and taking quick action. This is why we started working immediately on the long-term infrastructure at Gucci to address our shortcomings," said Gucci CEO Marco Bizzarri in a press release. "And now through our Changemakers program, we will invest important resources to unify and strengthen our communities across North America, with a focus on programs that will impact youth and the African-American community."


One of the Changemakers initiatives is a volunteering programme which allows Gucci employees around the world to use four paid days to volunteer, with activities ranging from helping refugees or the homeless to environmental protection, as well as teaching and promoting equality.


The house also set up a $5 million Changemakers Fund, which will finance initiatives benefiting local communities in a number of cities throughout North America. Another $5 million will be allocated to a parallel fund dedicated to the Asia-Pacific region next year.


A further $1.5 million will also go towards financing scholarships for 70 fashion students in North America, who will be selected by a specially created committee, the Changemakers Council, made up of some fifteen American personalities.


The programme will be supported by designer Alessandro Michele, who has worked ceaselessly to promote diversity since he took on the role of creative director at Gucci, a mission attested to by his often gender-neutral style and his choice of muses – from transgender actress and model Hari Nef, to 82-year-old British actress Vanessa Redgrave.
at April 13, 2019

Email ThisBlogThis!Share to TwitterShare to FacebookShare to Pinterest
Labels: GUCCI