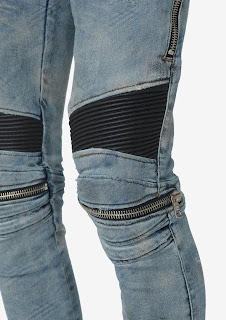 The American company, which filed its complaint in federal court in Los Angeles on Wednesday, is demanding $3 million in compensation from Inditex's flagship brand, according to Bloomberg Law.

In the filing, Amiri claims that unique elements from its design, such as pleated leather panels and zip openings at the knee, have been reproduced in the jeans made by Zara, which currently do not appear to be for sale on the retailer's e-commerce website.


In contrast, Amiri is still selling its AMIRI MX2 jeans on the menswear section of its e-commerce platform for a price of $1,150.00.

This isn't the first time that Zara and other Inditex brands have faced accusations of plagiarism. Last summer, Cuban brand Clandestina sent an ironic message to the Spanish company after noticing that Zara was producing pieces featuring mottos that were similar to those on its own t-shirts. In 2016, American artist Tuesday Bassen also claimed that the Galician company had copied her designs and used them on its clothing.
at January 25, 2020