Dolce & Gabbana open softly in Paris with Napoleon and Josephine 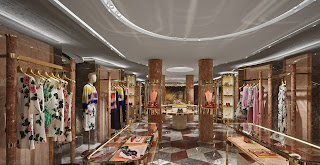 Dolce & Gabbana have opened an opulent new boutique in Paris and invited Napoleon and Josephine along to the top-shelf superstore.

Located in the heart of the Paris shopping mecca, at 3 and 5 rue du Faubourg Saint-Honoré, in the 8th arrondissement, where it keeps company with flagships of Prada, Gucci, and Hermès historic headquarters and emporium.


A blend of Roman imperial marble and columns and Napoleonic Empire detailing the flagship features Fior di Pesco, Salomé and Sequoia Red marbles, trimmed with shiny bands of gold. The architectural team of Eric Carlson and Carbondale Studio oversaw the redesign of the store, very in step with Dolce & Gabbanaʼs long-term project to elevate the marque to true haute couture status, from its more rock 'n' roll youth.

It includes the Italian duo’s fine jewelry designs, luxury menswear and women’s ready-to-wear and even a men’s made-to-measure department, where a pure Peruvian vicuna jacket will set a gent back 20,000 euros.
at January 17, 2020