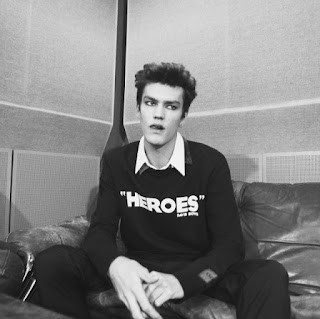 Hugo Boss is tipping its hat to the legendary British musician David Bowie with its latest fashion collection.


The luxury house's Hugo line has announced the launch of ‘Hugo Loves Bowie,' a limited-edition tribute series that channels the singer's rebellious nature, set to roll out in February.

Comprising menswear and womenswear, the collection draws on the era of Bowie's ‘Berlin Trilogy,' which saw him release the albums "Low," "Heroes" and "Lodger" from 1977-1979. It features separates and accessories such as t-shirts, sweatshirts, scarves and caps printed with the "Heros" marketing slogan "Tomorrow belongs to those who can hear it coming," as well as artwork from the album, shot by Masayoshi Sukita.


"David Bowie was a rebel spirit who lived life on his own terms," said Bart de Backer, senior head of design for Hugo Menswear, in a statement. "This capsule is an opportunity for us to celebrate the impact he had on the world and the values that we share."

Hugo -- Hugo Boss's younger label -- has been strengthening its ties with the music industry of late, having signed up another British singer, Liam Payne, to act as its global brand ambassador last year. Earlier this month the solo artist and former One Direction member was unveiled as the face of the brand's fragrance arm, with the star set to front the upcoming ‘Hugo Now' fragrance launching in February.
at January 15, 2020