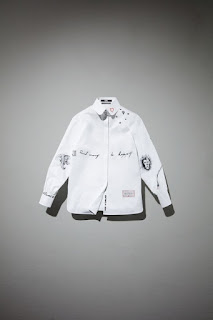 It comes at a moment of remarkable growth for the house of Karl Lagerfeld, whose turnover grew by 50% last year according to company President and CEO Pier Paolo Righi.
Eleven months after the great German designer passed away, the house presented a capsule of arguably his greatest single invention, the thoroughly chic customized white shirt, in a strategically placed space at the gate to Pittiʼs nerve center, Fortezza da Basso.


˝Pitti is a great connection point with the menswear world, but also to also show the whole world of Karl Lagerfeld. And, strangely, sometimes the consumer has a better understanding of the brand than many retailers,˝ Righi told FashionNetwork.com in an exclusive interview.
Besides a score of white shirts, the stand included a dozen menswear looks – mostly in Karlʼs signature black and white Expressionist style - and four ˝rejuvenated archive˝ designs styled by Carine Roitfeld. Two walls also carried over a score of sneakers and sporty footwear, a key growth era for the brand, that are made under license by Stephen Palmer for Overland.
The shirts were an initiative created by Carine Roitfeld where more than 50 friends and family of Karl invented avant-garde dress shirts that were first shown in Paris. 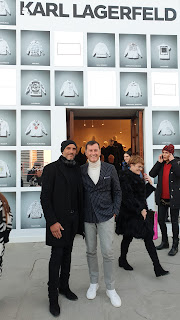 The house sold out 77 examples of seven selected shirts at 777 euros each, proceeds to go to the charity C‘est la Vie which Karl always had supported. Lagerfeld‘s lucky number was seven.
This shirt collection has already been shown in Dubai, Moscow and New York. The selection in Pitti included designs by everyone from Cristiano Ronaldo or Away Lee to Righiʼs personal favorite, Takashi Murakami.
˝The white shirt will become a legacy item in our collections for men and women. It‘s an iconic element in the house. Karl always said that if he invented anything in fashion it was the pure white shirt,˝ stressed Righi.
The house is now considering making these shirts into a semi-permanent exhibition in Paris. But there no immediate plans to return to the runway with a collection. ˝Maybe one day, it has been a continuous conversation. But even Karl, who was the master of staging fashion shows, didn’t want to go back into the catwalk show business model with his own label. And he didn’t want to compete with the Chanel show!˝ winked Righi.
at January 12, 2020