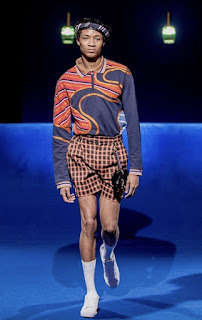 After being staged in recent seasons at an off-center location in rue de la Roquette, the event has moved to a new venue, the Atelier Richelieu, the ideal, effervescent setting for attracting a crowd of buyers, fashion industry professionals and media people.
The latest edition of the London Show Rooms presented 16 designers, all UK-based, the ebullient mood a contrast with the subdued ambiance at the Tranoï trade show in Place de la Bourse - the event has pledged to reinvent itself next year, after recently changing its management team.


Among the new names at the London Show Rooms, London-born designer Priya Ahluwalia and her Ahluwalia label. Ahluwalia, a graduate of Westminster University, won the H&M emerging designer competition in 2019 and presented a streetwear collection markedly influenced by her Indian-Nigerian roots and London upbringing. Ahluwalia’s looks, mostly fashioned out of inventory-clearance and second-hand fabrics, are big on vivid prints, and feature shorts with typical 1980s sports jackets, all-denim outfits and flowing suits with colorful panels.
For the Paris Fashion Week Men’s, Ahluwalia also presented a series of vintage-style, brightly-colored items in collaboration with Adidas, matched with SC Supercourt sneakers.
It was a Parisian debut for Ahluwalia, first spotted at Opening Ceremony and now distributed at Browns and at Ssense in Montreal.


Another label that was seen and worn by designers at the show was jewelry brand Hatton Labs. Founder Jack Cannon is a designer who hails from Hatton Garden, London’s jewelry district.
Inspired by his milieu, Cannon has produced a jewelry collection heavily influenced by street culture. Hatton Labs products are conceived using 3D design and printing and include the Smiley and Chinatown rings, pendants combining pearls and chains, gold-and-silver bracelets and a plethora of padlocks and carabiners attached to chains of various shapes and sizes.
Hatton Labs is a hit with many British celebs and is available at Selfridges, Browns, Farfetch, and End.
at January 24, 2020