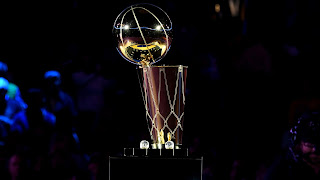 LVMH’s Louis Vuitton said on Wednesday it had struck a partnership with the National Basketball Association (NBA), a major men’s professional league, as the luxury goods brand ramps up its efforts to make a splash in the United States.


Vuitton, best known for its pricey leather handbags and for dressing stars on the red carpet, said in a statement it will design a case to house the NBA trophy, as it has done in other sports such as tennis and soccer, and produce clothing ranges inspired by the league.

The parties did not disclose any financial details or say how many years the partnership would last.


“The NBA as a brand goes beyond sport, some of the players are a brand unto themselves,” said the NBA’s Europe and Middle East managing director Ralph Rivera, at a party to launch the partnership.

The tie-up had no immediate commercial benefit for the NBA but was more about reinforcing its image, Rivera said.

The United States is one of the largest markets for high-end brands after China, and the tie-up marks the brand’s first partnership with a North American sports league, Vuitton.

The agreement comes amid a drive by Vuitton - the world’s biggest luxury label by sales and the main revenue driver at its French parent group - to woo U.S. shoppers as well as young consumers.

Like movie stars, singers or models, sports stars can also wield influence in the world of fashion, as fans look to emulate their look or follow their every step on social media, and brands are increasingly trying to court shoppers this way.

“Our players are on social media ... and part of what people look at is fashion, it’s what they’re wearing... You’ve got a whole sneaker culture around the game too,” Rivera said.

The NBA-linked, limited edition range of clothing will be designed by Virgil Abloh, who became the first African-American to be named creative chief for menswear at Vuitton last year.
Abloh, a one-time DJ, is known for popularizing streetwear such as hoodies in luxury circles.
Vuitton manufactures the bulk of its handbags in France, but last year opened its third U.S. leather factory, in Texas. U.S. President Donald Trump attended its launch, alongside LVMH’s billionaire boss Bernard Arnault.
at January 22, 2020