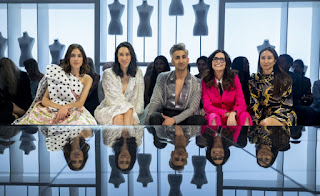 Net-A-Porter has teamed up with Netflix to help choose the winner of the new ‘Next in Fashion’ competition. The winner will receive the opportunity to debut their collection at Net-A-Porter plus a $250,000 prize.


‘Next In Fashion’ is a high-stakes competition series featuring some of the world’s best new design talent and quiet innovators who compete for a chance to become the next big name in fashion.

Hosted by fashion designer and TV personality Tan France, best known for his appearance on Queer Eye, and Alexa Chung, the show will put 18 competitors to the test in a series of challenges.


The winner will be chosen in front of a live audience by a panel of judges including Net-A-Porter’s global buying director Elizabeth von der Goltz, who will be acting as a guest judge. Additional guest judges throughout the series include Instagram’s Eva Chen; designers Prabal Gurung, Phillip Lim and Christopher Kane; and LA celebrity stylist Elizabeth Stewart.

Net-A-Porter said this collaboration builds on its commitment to support emerging talent.

“We are delighted to work with Netflix on ‘Next In Fashion,’ awarding $250,000 and the opportunity to be stocked at Net-A-Porter to an incredibly deserving talent; ‘Next in Fashion’ further showcases our long-term support of global fashion talent,” commented Elizabeth von der Goltz.