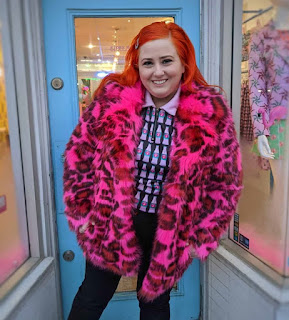 Canadian designer Hayley Elsaesser is waving goodbye to her flagship in Toronto, and saying hello to a new business model.

In typical Elsaesser fashion, the designer took to her social media over the weekend to make the bold statement: “Fashion is changing and so are we”, citing problems with the industry such as economic and political challenges and environmental issues, as reasons for the change.

Among the changes that the designer is embarking on, Hayley Elsaesser will close her wild and colorful store on Queen Street West, to become a fully digital e-commerce business.

“We’re moving into cyberspace,” Elsaesser explained in an IGTV video. “We’ve had a great run on Queen Street West, and have enjoyed being part of the community, but in order to do things more sustainably, we need to lower our overhead costs.”

Moving forward, the brand will also embrace a primarily made-to-order business model. While the company may continue to release the occasional capsule collection, its main collection will only be created on-demand.

Its new business model will also embrace drop-shipping, so items will come directly from suppliers, limiting the company’s environmental impact and carbon footprint.

Elsaesser said the business will make an effort to let consumers know where items are being created and how long they will take to be delivered.

The company also announced that it will work to offer fair prices, but will ultimately move away from the “clearance model”.

“This change has been tough and we’re not entirely sure how it will all shakedown,” Elsaesser concluded. “Let’s try something different.”

Launched in 2013, Elsaesser is a Canadian favorite having previously teamed up with a range of brands and retailers. Most recently, she celebrated the 60th anniversary of Barbie with an exclusive collection of Barbie-inspired clothing with fellow Canadian designers at the Hudson's Bay. She has also collaborated with the likes of Nike, Taco Bell and launched a lipstick collection with Annabelle Cosmetics.

While Elsaesser is clearly taking her future into her hands, she joins a growing list of retailers who have exited the Canadian retail market in 2020.
at February 10, 2020