Hermès debuts its Year of Innovation, and unveils site of new mega-flagship on Madison 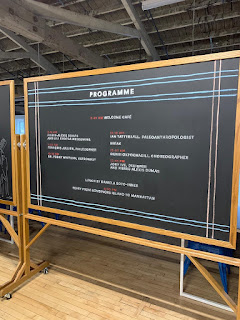 The house of Hermès unveiled its latest annual theme, which for 2020 is Innovation in the Making, with a multi-layered series of events spread across Manhattan on Thursday.
This being Hermes, they included a morning symposium on an island in New York Bay with a series of proper brains and, in the evening, a mesmerizingly poetic display - a live film performance of special effects inside the latest, future super-boutique of Hermès, the equestrian brand par excellence, on Madison Avenue.

The day began with a school bus ride down the East River and a windy ferry crossing to Governor’s Island, where the house’s artistic director Pierre-Alexis Dumas and art apparatchik Lili Chopra conducted a series of debates and lectures. From a philosophical discourse by France’s most-read living philosopher François Jullien; a lecture on space travel by a real astronaut; a learned lesson on paleoanthropology; a dance performance by Okwui Okpokwasili; and an interview with former Apple design master Jony Ive.

Landing on the island to be greeted by a local brass band playing before a sign that read, Welcome to Hermès University. Inside the exhibition space, the morning’s participants’ names were written on chalk on a series of blackboards.

“Hello, I’m the Dean of Creative Studies, and you are the class of 2020,” joked Pierre-Alexis in his opening remarks, as 150 guests sat on small metal high school desks. He promised the morning would go from the origin of man to the ends of the universe. It did. Beginning with hunter gatherers who rode the first horses and already knew one of Hermès mottos: "If you fall off the horse you get right back on again.”

Astronaut Dr. Peggy Whitson, who grew up on a farm in Iowa, explained that space travel was all about looking at things from different angles, as she showed some remarkable photos of earth from the Space Station. And a series of images of her team in outer space mending a gigantic solar panel which had ripped, basically sewing it back together with steel ropes.

“Growing up on a farm, my dad used to always say that you could fix pretty much anything with a pair of pliers and a roll of Number 9 wire, which is pretty much what we did!” she smiled.
at February 16, 2020