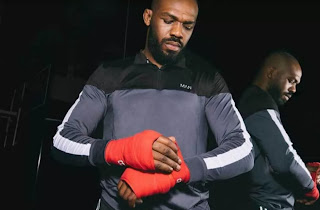 BoohooMan has unveiled its face for 2020 and has selected MMA fighter and light-heavyweight world champion Jon Jones. The company has favored sports stars to reach its target audience in recent years and has also signed up Dele Alli, Leon Bailey, Lawrence Okolie and Simeon Panda.

But the company said the year-long deal with Jones will be more than just a face-of link-up and there will be some initiatives that go “beyond a single photoshoot”, although we don’t yet know what they are.

The division's chief executive Samir Kamani called Jones “arguably the best MMA fighter of all time. Our values and beliefs are so aligned, to be the best we can be — so this partnership just made sense. As a brand, we lead by aspiration and that is at the core of every athlete.’’

Mixed martial arts fighters have seen their earnings power shooting up in recent years as their particular brand of new-age machismo has seen them partly taking over from footballers as fashion’s favorite sports stars.

And the most successful of them, Conor McGregor, has built up a fortune worth more than $100 million as a result of being in demand by a wide number of brands.

BoohooMan didn’t say how much it’s paying Jones, but we assume that his high profile means it’s a considerable sum. It did say its new ambassador represented a “new dynamic to the way BoohooMan has traditionally aligned with celebrities and athletes”.

The company publicized the new deal with a shoot in which Jones has been photographed in the new activewear collection it launched this year.
at March 04, 2020