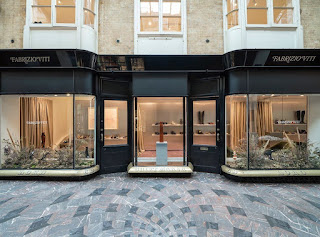 Louis Vuitton’s footwear designer Fabrizio Viti has opened his first store for his signature brand in London with a pop-up in upscale Burlington Arcade.


Located at the Piccadilly end of the Arcade, it features his classic and new-season collections, alongside two artworks by American minimalist sculptor DeWain Valentine, on loan from the Almine Rech gallery.

The store’s open seven days a week and a portion of the proceeds from its sales are being donated to the Italian Red Cross.


With footfall to the West End of London down and the important tourist flows that the area (and Burlington Arcade in particular) relies on plummeting, it may seem like an inopportune moment to be opening any kind of store, let alone a pop-up.

But it’s a sign of the business attempting to carry on as usual and with the UK has not yet decided to close non-essential stores, luxury labels are trying to make the most of a tough situation.

Burlington Arcade is actually a good location for anyone opening a niche footwear store as it’s already a destination for this category. Other boutiques in the arcade include Manolo Blahnik, Kwanpen, Crockett & Jones, Mou and Church’s.

The store will stay open until the of June, assuming UK stores are allowed to carry on trading, and the plan is to then move on to Paris and New York, again assuming that’s allowed.
at March 16, 2020