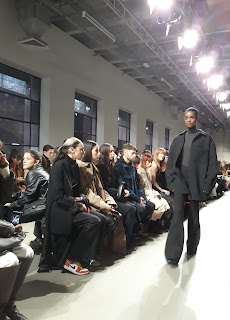 Ample suits, oversized jackets, and men's shirts, statement trousers and overcoats are the foundations of Gauchere’s Fall/Winter 2020-21 collection, which also features calf-length dresses and skirts. Most of the garments are made in wool or flannel, a few stand-out looks also featuring soft leather for trousers and shirt dresses, as well as fine knitwear.

The clothes are precisely cut and rigorously monochrome, in a neutral, highly masculine palette in which greys predominate. The cuts are sharp, and the volumes are mostly accented at the shoulders. Dresses cinched or tied at the waist with sliding belts fastened at the back emphasize this power-shoulder effect, as do the pagoda shoulders featured in some dresses and sleeveless jackets.

“Men's tailoring is at the heart of the collection, but it's a relaxed kind of tailoring. I wanted to play with the rules of executive style by emphasizing the shoulders, to empower women,” said Statz, talking to FashionNetwork.com backstage. “For this first show on the official calendar, I wanted to send a very clear message, focused on a notion of Brutalism and on an imposing, extremely minimalist silhouette, always inspired by menswear,” she added.
at March 04, 2020