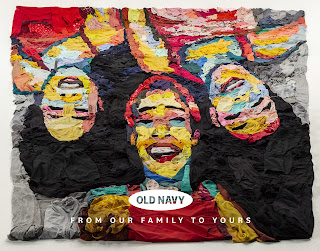 Gap Inc.'s Old Navy is set to donate over $30 million worth of clothing to American families in need in order to provide relief during the Covid-19 pandemic.

The apparel brand said it will work with several partners, including nonprofits like Good360, Baby2Baby and transportation partner Penske Logistics, to distribute the clothing.

On top of the clothing donation, Old Navy announced it will also donate 50,000 non-medical-grade reusable masks to its longtime partner, Boys & Girls Clubs of America.

In order to promote the new charitable initiative, Old Navy partnered with Richmond, Virginia-based artist Noah Scalin to create a special portrait of a mother and her two daughters, made entirely out of Old Navy clothing.

Parent company Gap Inc., which also owns Athleta, Banana Republic and Gap, has launched several relief projects during the course of the pandemic. Previously, the company contributed to crisis relief by wielding the Gap Foundation to donate $1 million to local, state, national, and international nonprofits to support struggling families, in addition to using its supply chain to provide critically needed Personal Protective Equipment to hospitals.

Despite a brighter outlook earlier this year, the impact of the pandemic has hit Gap hard. In mid-March, Gap Inc. reported that its comparable sales for the fourth-quarter fell less-than-expected. Total sales came in at $4.7 billion in the fourth quarter ended February 1, while comparable sales fell just 1%, compared to analyst expectations of a 3.58% decline.

But as the crisis continues, the company has encountered major obstacles at the same time as it pushes forward with charity efforts and launches new partnerships. In late April, the company warned of a cash shortage as it struggled to maintain the funds necessary to keep its operations running and keep up with store rent payments. The issue of rent has already resulted in the company being sued for more than half a million dollars over the nonpayment of rent for one Manhattan store.