Brooklyn Beckham proposed to his girlfriend, Nicola Peltz with a diamond engagement ring worth more than £350,000 (Photos) 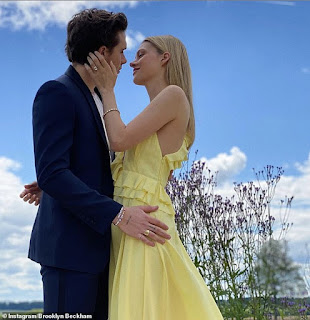 Brooklyn Beckham, the eldest son of celebrity couple David and Victoria Beckham announced his engagement to his billionaire heiress fiancee, Nicola Peltz, 25, over the weekend.

It has now been revealed that the 21-year-old British photographer proposed to the American actress with an engagement ring worth more than £350,000.

Speaking in an interview with MailOnline, top gemologist Alexandra Michell from Prestige Pawnbrokers of Channel 4's Posh Pawn praised the 'timeless' diamond ring chosen by Brooklyn, 21, for Nicola, 25, and believes it is worth more than £350,000.