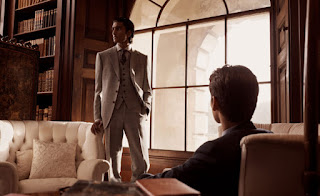 As the world tries to get back to normal despite the risk of a Covid-19 second wave, delayed movies are now being released and product tie-ins, including one for the latest in the Kingsman series, are debuting.

Mr Porter launches its third “costume to collection” collaboration of luxury menswear label Kingsman this week, although the new movie itself, The King’s Man, won’t appear until next year.

Originally slated for a release late last year, the date was pushed back to February 2020 then to this month. But the pandemic derailed that plan and the launch is now set for February 26 2021. The changed release schedule means the e-tailer launches a first collection drop this month but will follow it up with a second edited drop in February.

The new collection features luxury tailoring and casualwear, “inspired by the manufacturing tradition of Savile Row and collaborated on with specialist British heritage brands”.

It’s an important launch for Mr Porter as Kingsman is actually one of its best-performing luxury brands, having first launched alongside the 2015 Kingsman movie and having delivered 12 commercial seasons to date.

The costumes in the new movie “reflect the timeless style and functionality of tailoring and military wear from the film’s period, set during WW1, with silhouettes and styles made relevant for contemporary dress,” we’re told.

Mr Porter will also debut new products and partner brands including a writing instrument from Montblanc and a limited- edition timepiece from Jaeger-LeCoultre.
at September 10, 2020