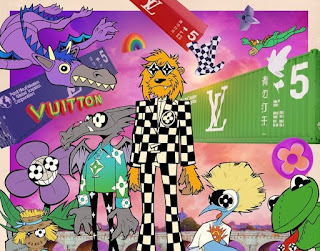 At the beginning of summer, Virgil Abloh announced that his new menswear presentation for Louis Vuitton would be an itinerant, upcycling-themed showcase, featuring “something new and something seen before.” An innovative, itinerant event that will come to a close on Wednesday, September 2 in Tokyo, with a show unveiling the final installment of the luxury label’s menswear collection for Spring/Summer 2021.

After stopping over in Shanghai on August 6, the final destination of Louis Vuitton’s menswear journey in Tokyo, where the luxury label recently opened a store dedicated exclusively to its men's ready-to-wear collections, the first of its kind in the world.

The event is being organized by Louis Vuitton’s local staff, and the venue has not yet been revealed. “The setting and the show itself will be totally different from Shanghai’s, and two-thirds of the items on show, some 60 new looks, will be different too,” a spokesperson for Louis Vuitton told FashionNetwork.com.

The traveling trunk theme, featured in the collection’s two previous presentations, will still be the leitmotif for the unveiling of this season's Louis Vuitton menswear. The project took shape and kicked off on July 10 in Asnières, close to Paris, in Louis Vuitton’s historic workshop, with the premiere of a short film, entitled ‘Message in a Bottle’, released for the Paris Digital Fashion Week.

Two movers in blue overalls sporting the LV logo were pictured loading a series of trunks on a barge, heralding the start of the journey, and getting the itinerant presentation underway. A gang of cartoon characters, Zoooom, and his friends, also featured in the video, giving it a pop, playful vibe.

In Shanghai, the show was staged on the dockside, with an audience of 1,000 guests. It was streamed live on Louis Vuitton’s social media channels and lasted over 30 minutes. Spectators were treated to Louis Vuitton’s new menswear wardrobe, which puts an emphasis on upcycling, with no fewer than 25 looks culled from previous Virgil Abloh-designed collections. The final show in Tokyo is scheduled for Wednesday at 7 pm local time.
at September 02, 2020