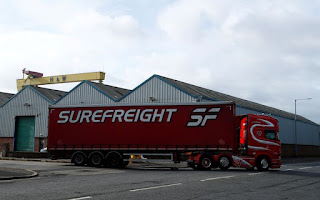 British retailers and manufacturers could stop selling in Northern Ireland once the UK has finally left the European Union due to "overwhelming" customs demands and lack of border preparedness, industry officials said on Wednesday. In order to secure a Brexit divorce deal, London agreed that the province would remain in the UK customs territory but maintain customs and regulatory alignment with the EU to prevent the need for a hard border with EU-member Ireland.
But that will create a customs border in the Irish sea with Britain and the infrastructure and systems that will be required to conduct checks on livestock and food are not yet ready. Elizabeth de Jong, head of policy at trade group Logistics UK, told parliament on Wednesday that companies could withdraw from the province when they realize the level of paperwork they will need to ship into Northern Ireland.
"There are high levels of concern about Northern Ireland - Great Britain trade because of issues with systems, infrastructure, and information delivery," she told a parliamentary committee on Brexit.
"If you're in the post and parcel sector, there can be 5,000 consignments in your truck and each consignment needs a safety and security declaration and each one has 36 data entry fields."
Steve Bartlett, head of the Association of Freight Software Suppliers, said the software needed to submit declarations was unlikely to be ready for Jan. 1 when Britain finally leaves the EU, and he did not know if there was an alternative plan.
"We don't have a complete proven system yet and ... a lot of my members will not be ready to deploy by the beginning of next year," he said.
Retailers, which deliver stock to shelves on a just-in-time basis to cut out the need for storage, have started to sound the alarm, with supermarket Sainsbury's saying it could cut its food ranges in the province unless it gets clarity on the new rules.
Britain remains in talks with the EU over a free trade deal and the processes that will be needed for the Northern Irish border.
at November 11, 2020

Email ThisBlogThis!Share to TwitterShare to FacebookShare to Pinterest
Labels: British